Will ChatGPT Impact the Translation Industry? – Let’s Hear It from the Source 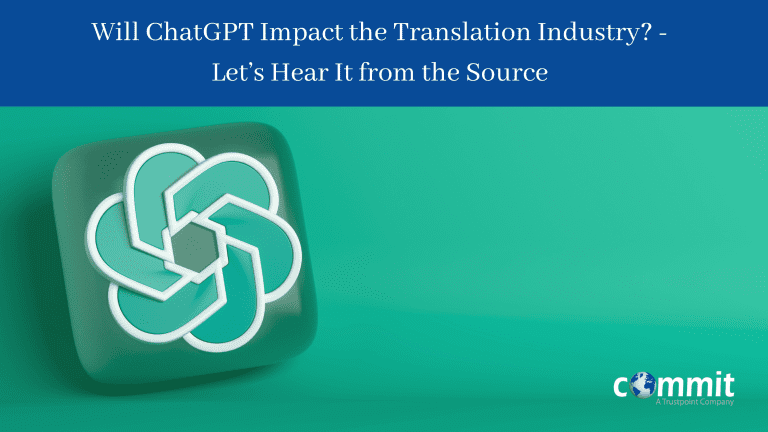 ChatGPT is THE hottest topic in technology right now. The model’s potential is enormous and far-reaching and there is no doubt that AI is going to affect most industries in the future, translation and localization included. While many people who try the tool are amazed by the results and its capabilities there are also those who are concerned about the impact that this new technology might have over the coming years and decades.

Since we wanted to know more about ChatGPT and its potential impact on our industry, we decided to ask the AI model itself. So here comes our first interview with ChatGPT:

Tell us a bit about yourself, what is ChatGPT?

I am ChatGPT, a large language model trained by OpenAI. I am capable of understanding and responding to a wide range of natural language text. I can answer questions, generate text, and assist with various language-based tasks. I was trained on a massive dataset of text from the internet, so I have knowledge on a wide range of topics.

Many people foresee that you will have a severe impact on many industries in the future. What about the translation and localization industry, what do you think your impact will be there?

As a language model, I have the potential to significantly impact the translation and localization industry. With my ability to understand and generate text in multiple languages, I could potentially be used to automate the translation process, making it faster and more accurate. This would make it easier for businesses to expand into new markets and for individuals to communicate with others who speak different languages. Additionally, my ability to understand context and generate human-like text could also be useful in creating localized content for different cultures and regions. However, it’s worth noting that there are still many challenges to be solved in the field of machine translation and localization, such as handling idiomatic expressions, cultural references and subtle nuances that are hard to capture by a machine model such as myself.

Is there a risk for linguists and translation project managers to lose their jobs because of you? Or will they need to adapt to a new way of working?

ChatGPT provides answers in real-time. Do you expect to replace machine translation tools like Google Translate and DeepL?

Machine translation tools like Google Translate and DeepL are specifically designed for the task of machine translation, they are optimized for this task and are able to handle large amounts of text and multiple languages. They are often trained on vast amounts of parallel texts, which allows them to make accurate translations in many cases. These tools are often used for simple and direct translations, such as translating a sentence or a short paragraph from one language to another.

On the other hand, general-purpose language models like ChatGPT are not only designed for machine translation, but also for a wide range of language-related tasks, such as answering questions, summarizing text, writing creative content, and so on. They are trained on a vast amount of data, which allows them to have a deep understanding of the language and to generate human-like text. They can be used for a more complex task, such as language generation, language understanding, dialogue systems, and so on.

Are there any benefits from using a Large Language Model tool for translation than using a Machine Translation tool?

Yes, there are several benefits of using a large language model (LLM) tool for translation over using a machine translation (MT) tool. Some of these benefits include:

It’s worth noting that while LLMs can be more powerful, they also require more computational resources and are more complex to train and fine-tune. Additionally, the quality of the translations generated by LLMs can also be dependent on the quality and quantity of the training data, the fine-tuning process, and the particular model architecture being used.

Can you give us an example of a sentence where an LLM would provide better translation results than a Machine Translation tool?

Sure, here’s an example of a sentence where an LLM would likely provide better translation results than a machine translation tool:

Sentence: “The cat’s out of the bag.”

This is an idiomatic expression that means to reveal a secret. A machine translation tool might translate the sentence literally, resulting in a translation that doesn’t convey the intended meaning.

An LLM, on the other hand, could understand the idiomatic meaning of the expression, and generate a translation that conveys the intended meaning in the target language, for example: “The secret is out.”

Another example would be a sentence with a figurative meaning, for example: “It’s raining cats and dogs.” which is an idiomatic expression that means it’s raining heavily. A machine translation tool might translate the sentence literally, resulting in a translation that doesn’t convey the intended meaning. An LLM, on the other hand, could understand the idiomatic meaning of the expression, and generate a translation that conveys the intended meaning in the target language, for example: “It’s pouring down.”

It’s worth noting that this is not to say that LLMs are always better than MT tools in all cases, but they can be more powerful in handling idiomatic expressions, figurative language, and cultural references, which can be difficult for MT tools to handle.

What about live interpretation services? Do you foresee having a contribution there? Is there a prediction for text-to-audio on ChatGPT?

As a large language model, ChatGPT could potentially have a contribution to live interpretation services. However, it would likely require additional development and fine-tuning to optimize the model for this specific use case. For example, a model like ChatGPT could be fine-tuned to specific languages, domains, and styles, and used to generate real-time translations during live events or conversations. Such an application would require a high-performance model, as well as a well-designed user interface, but it’s certainly possible.

One potential application of ChatGPT in live interpretation services would be in the form of a text-to-speech (TTS) system. By using ChatGPT to generate spoken language, it could be used to provide real-time spoken translations of written text. This could be particularly useful in situations where live human interpretation is not feasible, such as in remote or online meetings.

ChatGPT can be used to generate natural-sounding speech from text, this is known as Text-to-Speech (TTS) and is a separate field from machine translation. With TTS, a model like ChatGPT would take text as input and generate an audio output that sounds like a human speaking. This technology is already being used in various applications, such as voice assistants, automated customer service systems, and accessibility tools for people with visual impairments.

It’s worth noting that the quality of the speech generated by a TTS system based on an LLM like ChatGPT will depend on the quality of the model, the quality of the training data, and the specific TTS architecture being used. However, in general, TTS systems based on LLMs have been shown to produce highly natural-sounding speech, and they are expected to improve over time as more data and better models become available.

It’s worth noting that while ChatGPT can generate realistic text-to-speech, it’s not as advanced as current text-to-speech models, which are specifically designed and optimized for this task. Additionally, providing real-time spoken translations of written text or spoken language would require a fast and stable internet connection, as well as a significant amount of computational resources.

Thank you for our conversation. I am sure we will talk again soon!

You’re welcome! I’m glad I could help. I’m always here to answer any questions you might have. Feel free to reach out to me anytime. Have a great day! 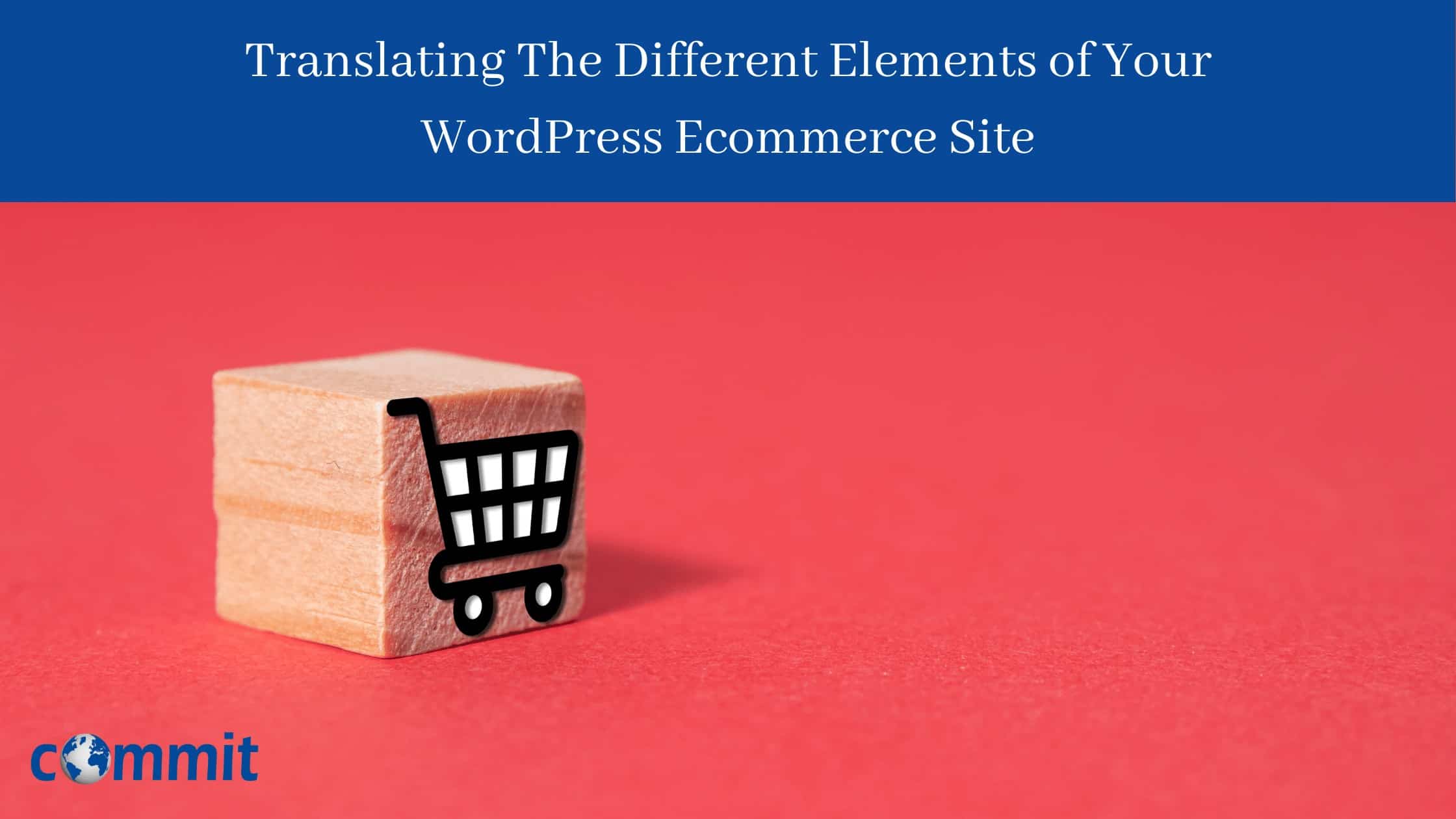 Translating The Different Elements of Your WordPress Ecommerce Site 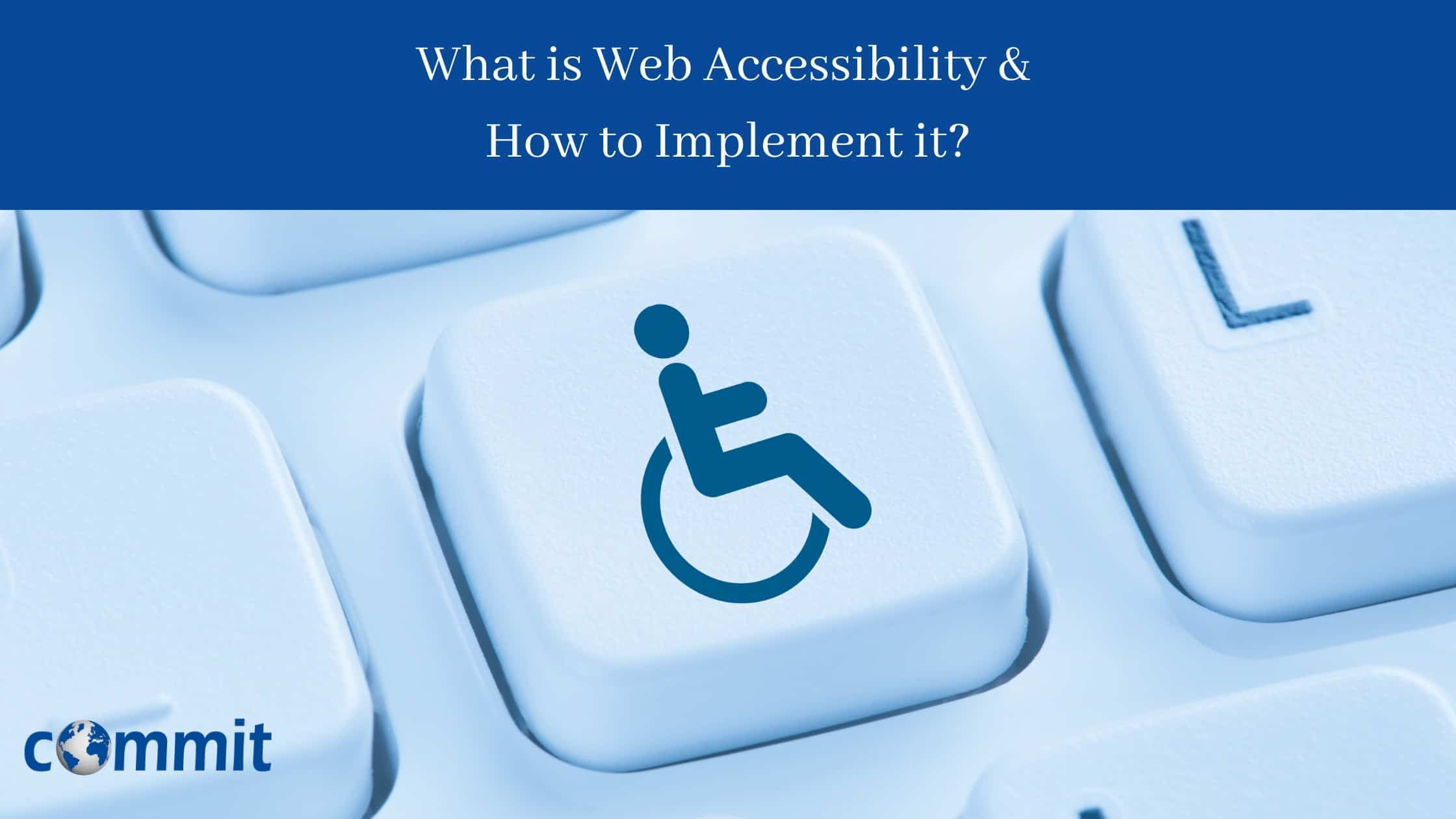 What is Web Accessibility & How to Implement it?

November 8, 2021
Listen to Post Listen to this article now: The Web has become an essential part…
Read More 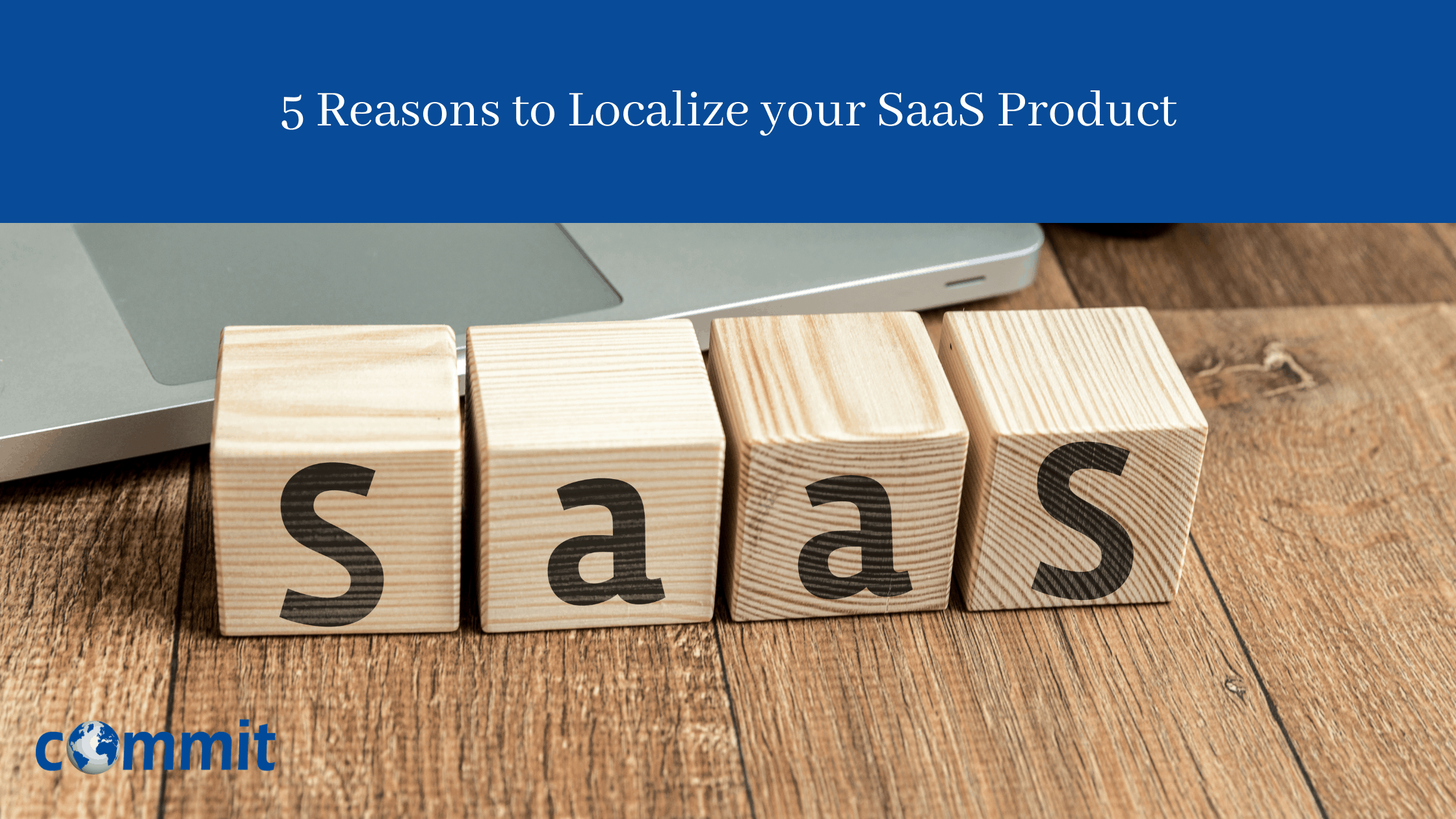 5 Reasons to Localize your SaaS Product

July 6, 2021
Listen to Post Listen to this article now: The prolonged period of the pandemic, brought…
Read More 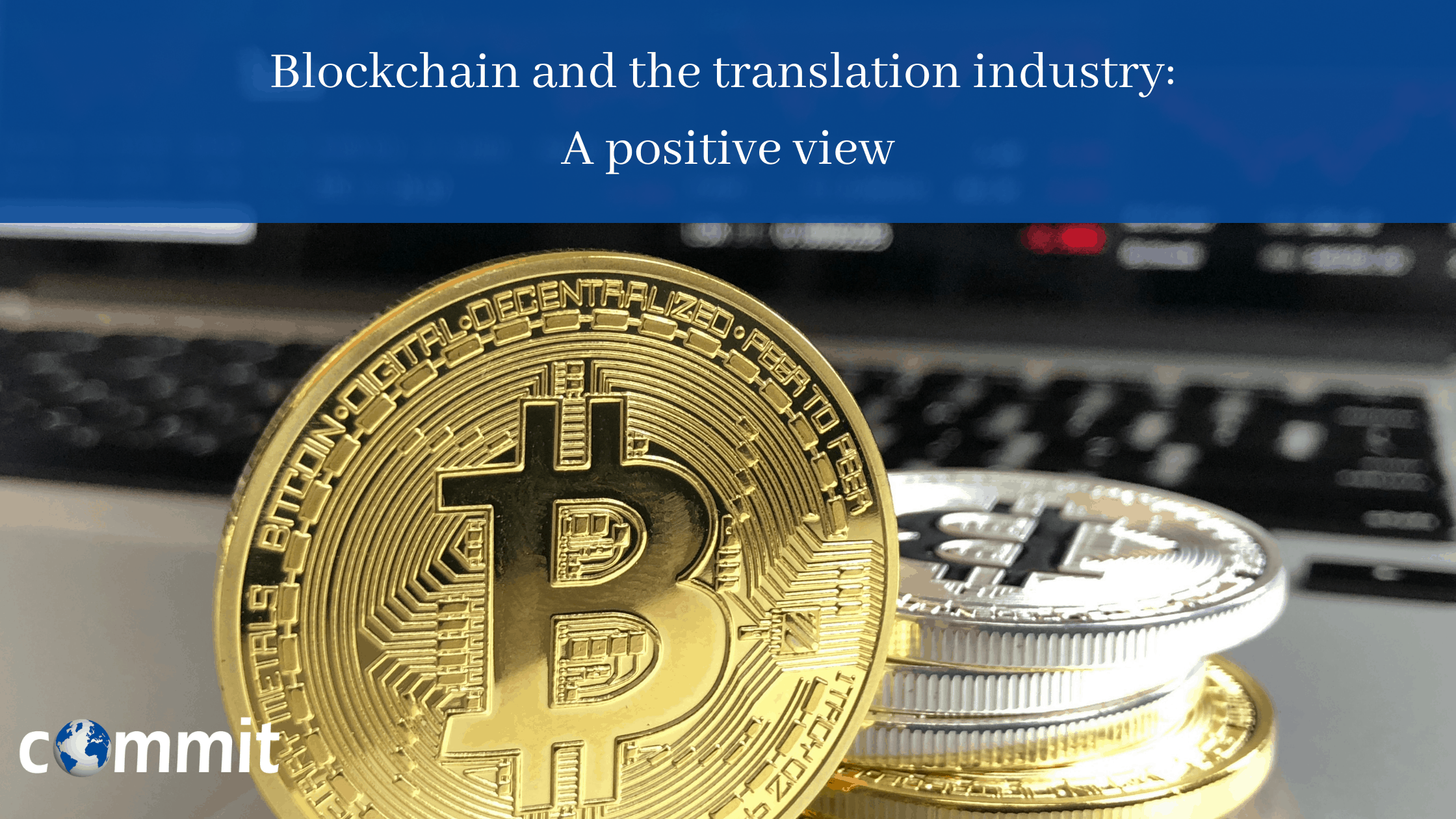 Blockchain and the Translation Industry: A Positive View

June 4, 2021
Listen to Post Listen to this article now:   What is blockchain technology? Blockchain is…
Read More

Will ChatGPT Impact the Translation Industry? – Let’s Hear It from the Source

ChatGPT is THE hottest topic in technology right now. The model’s potential is enormous